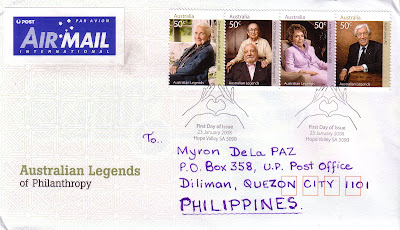 Here we have an FDC with a topic we don't encounter often in philately: philantrophy, particularly philanthropy in Australia. This issue features five of the most respected Asustralian philatrophists.

Issued each year to coincide with Australia Day, the Australia Post Australian Legends Award recognises great Australians who have made life-long contributions to the development of Australian national identity and character.

The Australian Legends Award began 11 years ago when for the first time a living person other than a ruling monarch was featured on an Australian stamp.

This year, Dame Elisabeth Murdoch (leftmost stamp), who is Patron of the Murdoch Children's Research Institute and a life governor of the Royal Women's Hospital, has been recognised for her extraordinary support across many sectors. Annually, she supports 110 charitable organisations.

Victor Smorgon (second from the left), industrialist and philanthropist, has been recognised for his enormous contribution to a wide range of medical and arts institutions in Australia including the Royal Victorian Eye and Ear Hospital, the Peter MacCallum Cancer Centre in Melbourne and the Victorian Arts Centre.

Lady Fairfax (second from right) has been selected as a recipient of the Australia Post Legends Award following decades of support to a wide range of social and economic activities including medical research, health care, opera and the arts and the preservation of diverse cultural heritage.

As Executive Chairman and co-founder of Westfield, Frank Lowy ( has been recognised for his generous support of arts, sport, medical education and research. Specifically, he established the Lowy Institute, an independent international policy think tank, and has made significant contributions to building the Lowy Cancer Research Centre at the University of NSW.

Thanks to Janice Parnell, who sent this to me in one of the CCCC circuits.