Thanks to my friend Edmund Ong, I was finally able to complete my set of the Singapore Today issue, which was released on 09 Aug 2008 to celebrate National Day.

Here is a cover from one of the lesser-known countries in Europe, Estonia.
Although this is not the first cover I have received from the country that shares a border with Latvia to the South, Russia to the East, the Gulf of Finland to the North, and the Baltic Sea to the West.

As you can see, the cover is very dirty and messy. I have included a scan of the back of the envelope so that you can trace the path that it travelled when it arrived in the Philippines. Mind that it was forwarded twice since it was addressed to the place where I stayed some time ago. 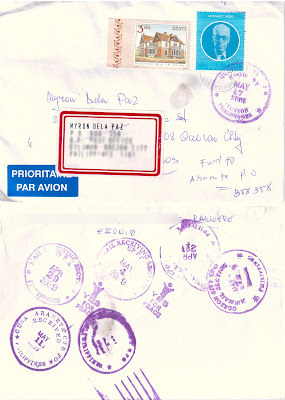 However, the stories behind the stamps are quite the opposite, as they reveal a picturesque 18th century estate and an admirable statesman who worked towards putting his country on the map.

Let's first begin with the uncancelled stamp on the left, which was issued in 1999. It features Olustvere Mansion in the northern part of Vijandi county in central Estonia. 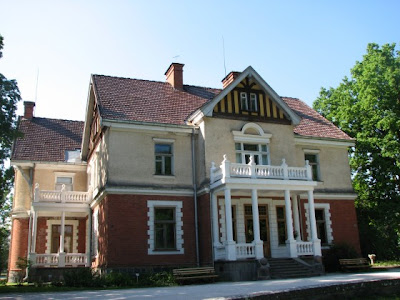 The blue stamp on the right was issued in honor of Lennart Meri, a statesman, filmmaker, and second president of the Republic of Estonia.

Born in Tallinn, the capital, he left Estonia at a very young age and went on to study at nine different schools in four different languages. Besides Estonian, which is closely realted to Finnish, Meri spoke five other language: Russian, French, German, English, and Finnish. He had a deep interest in the Finno-Ugric languages, which he encountered during his stay at a concentration camp in Siberia during the Second World War. His interest in the matter would live on to his later years.

He graduated with a degree in Hisdtor from the University of Tartu, but he was unable to pursue a career as an historian since Soviet politics kept him from doing so. Instead, he opted to delve into the arts and wrote books and films, which were warmly received and critically acclaimed.

In the 70s, he was able to convince the USSR to grant him permission to cross the Soviet borders known as the Iron Curtain. He used these opportunities to go to Finland and express the plight of the Estonian nation under Soviet rule, which included phosphorite mining, which would have left a third of the country uninhabitable.

He took part in the "Singing Revolution" led by Estonian intellectuals to urge people against Soviet rule. In 1990, Meri was appointed Minister of Foreign Affairs and thus envdeavored to establish ties with the West and thereby increase kowledge on the existence of the country throughout the world.

In 1992, he was installed as the second president of the republic, a position which he held until 2001.

He died in 2005 of a brain tumor. President Rüütel said, "In his nine years as head of state, Meri both restored the presidency and built up the Republic of Estonia in the widest sense." Finnish President Tarja Halonen stated, "The Finnish nation lost in Lennart Meri a close and sincere friend and the world, a great statesman who was one of the leading architects of the post-Cold War world." Latvian President Vaira Vīķe-Freiberga said, "the world has lost a great Estonian, a great statesman and a true European."

Lennart Meri was chosen the European of the Year in 1998 by French newspaper La Vie.